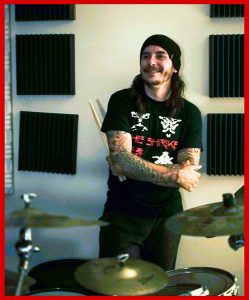 We are very pleased to announce our new drummer, Jordan VanSise!

Jordan is a Portland native and began playing in the high school drum line before moving on to playing the full kit in 2011, after returning from 4 years in the US Marine Corps. In 2013 he joined other local musicians in a group called Free Music! and more recently has been the drummer for Life’s Been Good, a Joe Walsh tribute band. Jordan is also a visual artist with a BFA in Contemporary Practices. He enjoys working in a variety of mediums including painting, photography and collage. His work has been shown at the Somerset House in London as well as the Portland Art Museum.